The ‘Personal Computer’ (PC) launched by IBM in 1981 was a breakthrough that revolutionised the workplace, though the early ones were quite limited especially in terms of how to use them and what they displayed. Not only did they have no ‘touch screens’ for ‘swiping’ and ‘apps’ as we know them now, but there was no ‘graphical user interface’ either. Rather than a ‘desktop’ with icons and a mouse pointer, there was just a black screen with text and a flashing cursor.

This was Microsoft DOS (Disk Operating System), which seemed to be the ‘proper’ way to use computers for at least a decade.

Indeed, some PC users were initially ‘suspicious’ of icons and windows which had appeared on the Apple Mac as well as other alternatives in use like GEM on the Atari ST.

People had become so used to typing commands, and knew all the ‘switches’ and other modifiers e.g. DIR /W to display a list of the files across the screen rather than in a column. And ‘WP’ was all you needed to get ‘Word Perfect’ to launch – the then favoured Word Processor, which gave rise to some still familiar short-cuts like ‘Control-C’ to copy.

Windows 3.1 showed PC users something different from around 1992, when 386 and 486 PCs powerful enough to run it well became available.

It even came with a tutorial to show users how to use a mouse!

No-one enjoyed having to install it using 7 floppy disks though.

And at first it seemed somewhat unnecessary to run existing applications.

Indeed, there was a bit of an ‘outcry’  that Windows 95 and later variants didn’t first boot into DOS!

But then it was realised there were some key benefits. Now you could delete a whole directory in one go without having to clear out each ‘level’ – not always the safest feature! Email really became more useable when you didn’t have to log in specifically to check to see if you had messages; now it could be running all the time in its own window.

The rise of the Internet – and security issues

With each variant of ‘Windows’ came more sophistication, and suddenly a whole world of connected information could be accessed with Netscape and then Internet Explorer, which then meant Windows really became a ‘must have’.

Certain difficulties were experienced getting old and new applications to behave themselves in the Windows environment; stability and also backwards compatibility started to become issues. Users now had to deal with ‘blue screen’ crashes of Windows, and then a variety of increasing security threats and viruses requiring ever-more enhanced anti-malware protection applications and mandatory backups.

The continuing need for ‘Legacy’ support

Although the majority of modern offices, educational establishments and homes now use the latest PC hardware as well as phone and tablet computing devices running the newest generation of operating software and applications, some industrial workplaces have professional implementations of systems that still make use of early computing platforms (ranging from desktop PCs to OSS servers), where the basic requirements are unchanged, and particularly in stand-alone use where security threats aren’t an issue. And some people still have old PC games to play!

It can however be quite a task to restore the operation of legacy systems, particularly if backups are missing or incomplete.

Associated issues include obtaining the appropriate hardware replacement parts such as disks (modern versions can be too high capacity to work well with old systems) requiring the right settings of cylinders, heads and sectors, and preparation using FDISK and FORMAT commands.

Software ‘patching’ of configurations may be needed, hunting out correct versions of driver files and specifying the right parameters. Creating a floppy disk with ‘boot’ files can also be a helpful tool!

There’s still a way today to run legacy software even without the old PC hardware, and that’s via the ‘joy’ of emulation and virtualisation. Even using an Apple Mac or Linux computer, it’s possible to run various flavours of Windows legacy software.

Particularly useful applications to enable this include:

DOSBox – a handy emulator tool which enables the running of old DOS based applications in an application window. Relatively straight-forward to setup, with the ability to ‘mount’ folders so that files can be imported. 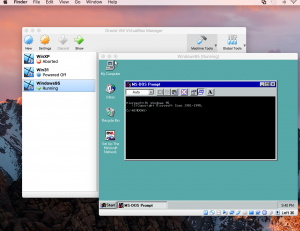 VirtualBox – a fully featured virtualisation tool that allows the creation of ‘virtual machines’ into which can be installed a full operating system, such as Windows 3.1, Windows 95 or Windows XP. The tool also emulates CD and Floppy drives for  loading disk images and running legacy applications.

Takes a bit of work to set up, preparing a virtual ‘hard disk’, and then installing the operating system. There’s a ‘work-around’ needed to take account of modern processors being ‘too fast’ for the old operating software! Also, to set the display to the necessary resolution and get sound working, special video and audio drivers may need to be installed.

Or you could try the Windows 95 ‘computer as an’ App created by Felix Rieseberg, which can be downloaded and installed on macOS, Windows and Linux!

@YellowsBestLtd we can assist with support services for both legacy and new software and hardware solutions, so please get in touch if you have any requirements you’d like to discuss;  we look forward to hearing from you.